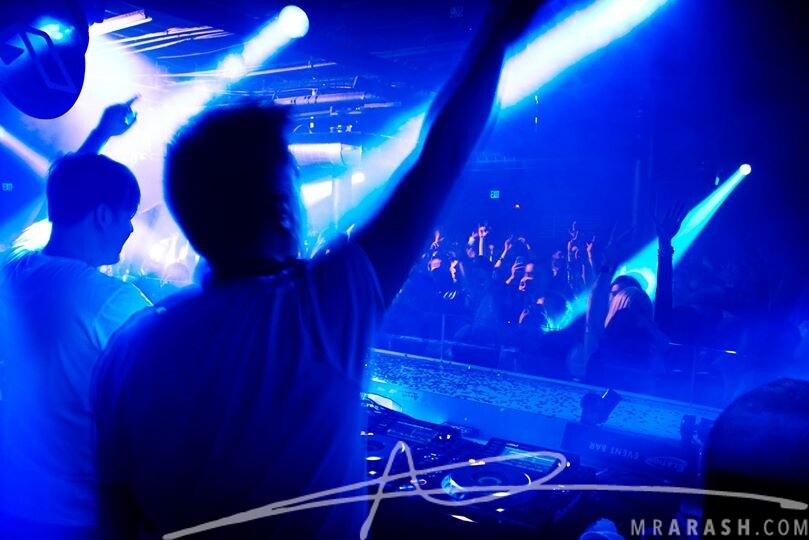 I wrote the piece which you are about to read possibly a decade ago. I know it was probably four or five years after the events upon which I am reflecting but also four or five years before I evolved into whatever version of Arash it is who is currently writing this intro. I don’t know when I wrote it but I can definitely catch glimpses of my guilt and shame issues hidden away between some of the adjectives and nouns. I can also see that I was still double spacing after all of the periods. I did some very minimal editing for clarity but 97% of what you’re about to read is the original draft.

I think this piece of writing mystically resurfaced because I’ve been hearing Ibiza calling me and the call’s been getting louder and louder this year. I want to live there for a month in the off-season to soak in what Ibiza Sonica Radio founder Igor Marijuan explained to me is “the real Ibiza.”

The featured photo accompanying this post is not from Ibiza. It is of Trance legends Super8 & Tab and I shot it after I interviewed them in San Diego for (now defunct) SoCal EDM Magazine. -Arash

If the sun is a peaking head from under the covers, the ocean is the sheets he is pulling over his face.

He is drifting off into dream-world as the orange sky blends into darkness.

I sit on the sand, watching the sunset at a beach a few blocks down the hill from our hotel in Ibiza.  The summer breeze caresses my face and exposed arms as my ears fill with the sound of rolling waves and soft electronic lounge music flowing from my tiny MP3 player speakers.  A large group of young Italian men and women are packing up their folding chairs and towels to my right.  I look to my left to catch my three buddies a few feet away signaling that it’s time to go.

Sunset in Ibiza is forever ingrained in my head as the sound of a thousand flip-flops slapping against skin at every liquor store on the island.  Bottles cling as thin European 20-somethings stock up on Vodka for the night.  My friend, Luis, is at the register, chatting with the employee in Spanish as she rings up our spirits.  I’m anxious.  Earlier today, Luis purchased some Ecstasy from a local at 20 Euros a pill.  I’ve never done any kind of drugs before but after two weeks of country hopping in Europe, I’ve decided I’ll experiment.

The thought of even drinking before I turned 21 brought back memories of my dad’s belt.  Americans are a more direct, less emotional people than Iranians.  For an Iranian, it is not an uncommon scene for a child to catch the flu and witness his or her mother behaving as if he or she has been hit by a car.  Think Italian grandmother melodrama on a sitcom if you don’t have a frame of reference.  When faced with these extreme responses, I developed a great deal of guilt and shame issues from an early age.  It wasn’t my parents’ fault; Iranians have Catholics beat by a large margin when it comes to guilt petaling.  When I talk of experimenting with drugs (any) for the first time at the age of 25, my friends chuckle.  I’ve always been that overly responsible guy: The one that breaks up all the fights, stays sober to babysit my friends and the one who doesn’t smoke any weed because I’m terrified at the prospect of having to lie to my parents if they ask (and they OFTEN do).  This is a big deal.  Something about being on the other side of the planet opens an internal gateway– a voice that says, “Everyone else does it and no one’s dead, right?”

It’s around midnight when Luis, our two friends and I pull into a parking spot on the dirt lot adjacent to the world famous club, Amnesia.

Ibiza is the Mecca of electronica to dance music junkies like myself.  That we’re actually here is surreal.  Luis takes the pills out of his pocket and hands one to each of us.  “Let’s do this,” he says as he tosses it in his mouth and takes a sip of water to wash it down.  We follow suit.

As we walk towards the front entrance, I keep asking myself if I feel anything yet.  Of course I don’t (the pill couldn’t possibly have entered my system yet) but I’m looking for anything that feels out of the ordinary.  We wait in line.

As I walk up to the bouncer, I feel anxiety.  Is he going to notice I’m on drugs?  Is he going to flash a light in my eyes and call the police?  Calm down.  This is Ibiza.  They know damn well everyone here is on something.  It feels like the bouncer keeps eye contact with me for a minute though realistically it was probably a couple of seconds.  “Enjoy,” he says with a Spanish accent.  I walk in.

The club is thumping.  The DJ is keeping the beat at a steady rhythm before Paul Van Dyk takes the tables.  It is a standard code of honor for opening DJs to respect the main act by not going too crazy and tiring out the audience.  I have not had anything to drink because people always tell me, “you should not drink when you do Ecstasy.”  To this warning, Luis always responds, “You shouldn’t do Ecstasy!”  Luis is the type of guy who would just go ahead and chop off his arm if he got a paper cut.

The four of us sit at a corner of the club and watch the crowd.  It’s not the meat market we’re used to in The States.  In American clubs, the majority of the crowd is there for one thing: Meet members of the opposite sex and try to take them home.  It seems like in Europe, people are more there just to dance and laugh.  The aggression level is just a lot lower.  A group of British girls take a shot together right next to us and start jumping up and down chanting, “I love Ibiza, Ibiza loves me!”

I feel pretty mellow but nothing unusual yet.  Luis suggests we get some drinks as that will help “kick in the effects.”  I walk up to the bartender and order four Cuba Libres (Rum & Cokes) and upon handing Luis his glass, he takes off the lime that comes with it and sucks on it.  The guys explain to me that citrus helps activate and enhance the effects of Ecstasy.  I follow along.  We have a couple more drinks and sit in the corner, chatting about almost anything other than being at club Amnesia in Ibiza.

Then it kicks in.

The feeling can best be described as, -well- ecstasy.  The opening DJ is just playing House music (which I’m not a huge fan of) but it starts to sound like the most amazing thing I’ve ever heard.  I feel extra mellow.  All my worries seem to evaporate.  The colors of the lights look brighter and more beautiful.  The club surrounding me starts to look as if I’ve been seeing the world on my 19” TV and just replaced it with a high definition widescreen.  The melody makes me smile from ear to ear.  The pain in my knees and feet, which have followed me through life ever more consistently than my own shadow, are gone.  I feel fantastic.  Everyone is smiling.

I walk up to the bartender and order another round.  She pours the drinks and is about to hand them to me when she hesitates, squints a bit and looks into my eyes.  She can see my dilated pupils.  She smirks, puts extra limes into our glasses and hands them over.  As I walk back to our corner, the British girls are bouncing past me.  A couple of them lean in, squint and explode in joyous laughter as they give me giant hugs and continue chanting (at me now), “I love Ibiza, Ibiza loves me!”  In Ibiza, you’re in the club but you’re not really in the club until you’re on Ecstasy.  I look around and start seeing all the dilated pupils.  If I had to guess, I’d say maybe 10% of the club was not actually rolling and it was glaringly obvious; I could see it in their more tense and aggressive body language as well as their missing smiles.

We dance the night away and have an amazing time.  The majority of the crowd is not even dancing together, just worshipping in unison at the altar of Paul Van Dyk.

It is about four A.M. when I find myself standing alone at a corner of the club, waiting for Luis to return from the bathroom.

I feel very relaxed and happy.  I start to do what I do most: Analyze.  Then it happens.  It dawns on me that I’m not feeling anything that I’ve never felt before.  The mellowness, the relaxation, the joy… No matter what drug you put into your body, it doesn’t have the capability to create a brand new feeling or experience that your body doesn’t already have the capacity for.  All it does is force release dopamine into your body.  I have felt a taste of this many times.  I have felt it on my bicycle at sunset after a long ride, coming downhill by the beach in San Diego.  I have felt it after a drink or two with close friends on a Friday night when I was 21 and had the world at my feet.  I suddenly feel pity for all those poor souls who have no choice but to resort to drugs and develop full on addictions. It’s easy to forget the beauty of life when we convince ourselves that we can’t see it without an external factor.  I think back to all those times that I’ve met zen practitioners who possess that aura of calm.  They have that same smiling face and relaxed body language.  That’s what it must feel like, to completely detach from all of life’s stresses and give up the hunt for material things.  They feel like they’re on Ecstasy all the time.

Luis returns from the bathroom.  I try to explain my revelation to him but he doesn’t really get it.

Years pass by and life has taken me in a variety of different directions.

The long and short of it is that I am now pursuing my dream of being a filmmaker and am a member of a Hip-hop group called the Diego Brown Project. (Editor’s note: I am, of course, very much active in the arts but no longer doing either of those last two specific things.) A couple of days ago we had this amazing practice session. We feel really great about a show we have coming up in a couple of weeks. As I drive home, I notice the world looks like it’s in HD. I feel relaxed. I feel good and energetic. I can’t stop smiling. There it is. It’s that same feeling. I’m on my true life path and surrounded by amazing friends and an abundance of love. Yeah, it’s not like the pill form which lasts for five hours but the feeling is the same and I am not under the influence of anything at all.

And here in lies the only part of this piece in which my edit changes a fraction of the original written piece’s intentions… I deleted three sentences from the very end of the original copy. The three sentences at the end were blatantly apologizing for my experience and covering my ass just in case somebody read this and judged me for it. And I am long past allowing any of that kind of energy into my experience. Sorry, absolutely not sorry.